Glossary terms about marijuana - what you should know before you grow 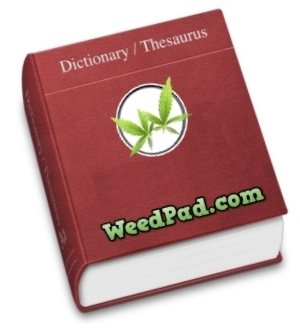 These are some simple marijuana glossary terms or slang you may have heard but didn’t quite know what they were. With there being so many terms, slang-words and lingo being tossed around the world about weed, we decided to hunt them down and dedicate a portion of the site for only the best weed verbiage and annotate them right here for our readers.

As we scour the globe to find more marijuana glossary terms we’ll be sure to add them right here. When we have enough for our own dictionary you’ll probably find a new section.

Please check back often for updates to WeedPads Marijuana Glossary Terms. If you have a marijuana glossary term, slang word or lingo we don’t yet have listed please send us a note and we’ll be sure to post it and give you props.

ALICE B. TOKLAS: The lesbian lover of Gertrude Stein and a good friend of Pablo Picasso, she had a recipe for killer marijuana brownies.

BALE: A compressed brick of marijuana, usually ranging in weight from 10to 40 pounds.

BHANG: An Indian and Middle Eastern smoking mixture consisting of pollen from marijuana flowers and ghee, an oily butter. In medieval Arabia it also referred to a datura-based knockout potion.

BLUNT: A joint rolled in the tobacco-leaf wrapper of a Phillies Blunt cigar.

BONG: A water-cooled pipe for one smoker, often made of glass or bamboo.

BRICK: A kilogram-sized slab or cube of compressed pot.

BUD: The fresh or dried flowers of the female marijuana plant.

CANNABIS INDICA: The scientific name for a species of marijuana plant, the Indian hemp plant.

CANNABIS SATIVA: Another species of marijuana, closely related to indica.

CHIBA-CHIBA: A black Brazilian form of reefer, usually gummy and compressed into bricks.

CHILLUM: A cone-shaped pipe made of clay, or sometimes of fruit or vegetable rinds. Also known as Chalice.

CHRONIC: The hip-hop term for high-quality or potent reefer.

COCKTAIL: A joint of tobacco and marijuana combined.

COLOMBIAN: The most common type of grass on the black market.

DOOBIE: A 1960s and ’70s term for joint; the word originated on the baby-boomer kiddy show Romper Room, where the good children were called “good Do-Bees.”

DOPE: Any controlled substance, although it usually refers to heroin or marijuana; also a hip-hop term for fine or good.

ELBOW: A pound of weed.

ENCLOSED; LOCKED FACILITY: A closet, room, or other enclosed area equipped with locks or other security devices that permit access only by a registered primary caregiver or registered qualifying patient.

FRESH or PHAT: Hip-hop term for good, great, grand, dope, fine; having an ample stash or supply of dope.

GOLD: Yellow pot from Acapulco in Mexico or Santa Marta Department in Colombia.

HASHISH or HASH: Smoking mixture that regionally varies, generally based primarily on resin from substandard Middle Eastern or Indian marijuana. There is a recipe to make Hash on WeedPad that we found to be quite authentic and easy to prepare.

HOOKAH: A hashish water-pipe with four long stems to accommodate four smokers at once; ref. the Caterpillar in Alice In Wonderland.

IN CROWD: Hipsters who throw secret parties for vipers only.

JEFFERSON AIRPLANE: Circa the 1940s and ’50s, a term for a roach-holder fashioned from a matchbook cover.

JOHNSON: 1960s term for a joint, referring either to LBJ or the membrum virile.

JAY: Another term for a marijuana cigarette (see joint).

KAFF: Golden pollen hash from Morocco, Lebanon and other Arab or Middle Eastern nations. Also known as Kif, Kief, Khayf and Kief. It is said that “A puff of kaff in the morning makes a man as strong as 1,000 camels in the courtyard.”

LAMBSBREAD: Large Jamaican buds which can be sliced like a loaf of bread and are shaped like a lamb’s tail.

MARIJUANA: Means that term as defined in most sections of the public health code. This spelling is somewhat legally suggestive in nature.

MEDICAL USE: Means the acquisition, possession, cultivation, manufacture, use, internal possession, delivery, transfer, or transportation of marijuana or paraphernalia relating to the administration of marijuana to treat or alleviate a registered qualifying patient’s debilitating medical condition or symptoms associated with the debilitating medical condition.

MEZZ: Marijuana; from Mezz Mezzrow, the legendary jazzman and Harlem pot-dealer who turned on Louis Armstrong and other jazz greats during the 1930s.

NICKEL BAG: Five dollars worth of pot, or any other street intoxicant.

OIL: The purified and concentrated resin from hashish or marijuana.

OH-ZEE: An ounce of pot.

PARAQUAT: A defoliant, toxic to humans as well as plants, that has been sprayed on marijuana throughout the world since the ’70s.

PANAMA RED: A potent strain of pot from Panama.

PHYSICIAN: An individual licensed as a physician within the state where the prescription or certification for medical marijuana is written.

PRIMARY CAREGIVER: A person who is at least 21 years old (depending on state) and who has agreed to assist with a patient’s medical use of marijuana and who has never been convicted of a felony involving illegal drugs. Check your state laws for the marijuana state laws

QUALIFYING PATIENT: A person who has been diagnosed by a physician as having a debilitating medical condition.

REEFER: Term for pot dating back to the turn of the century, and still popular. A great movie to watch is an old government propaganda film called “Reefer Madness”. Clicking the link will allow you to watch from here.

REGISTRY IDENTIFICATION CARD: A document issued by the department of health for that state that identifies a person as a registered qualifying patient or registered primary caregiver.

ROACH: The butt of a joint; it is strong because it catches and concentrates the resin from the rest of the joint.

SHIT: Any sort of controlled substance.

TEA PAD: In Harlem in the ’30s and ’40s, an after-hours club where pot was smoked and jazz music performed.

THC: The psychoactive cannabinoid in marijuana that is responsible for the high. It’s full scientific name is: TETRAHYDROCANNABINOL

TOKE: To inhale, or puff, from a joint of reefer.

TWENTY AND FORTY: Hip-hop term for a $20 bag of reefer and a 40-ounce bottle of malt liquor.

TWIGS AND SEEDS: The un-smokable leftovers from screening marijuana before sale, or the stuff at the bottom of the bag after purchase.

UNDERGROUND: The drug-using sector of society.

USABLE MARIJUANA: The dried leaves and flowers of the marijuana plant, and any mixture or preparation thereof, but does not include the seeds, stalks, and roots of the plant.

VIPER: Term for the 1930s hipsters who frequented tea pads and smoked jive; onomatopoeic from ssssssssst, the sound made by an inhaling pot-smoker.

ZIG-ZAG: A brand of rolling papers famous for the silhouette of a bearded smoker on the label.

If you’ve always wanted to grow your own marijuana plants at home, why not start today?